Me Too Moments of Women Scientists

Many women #scientists and #physicians have experienced #MeToo moments. All these experiences were annoying to the women. Many found the events hurtful and demeaning; some were scared.

Although sexual #harassment of women scientists has been frequently documented in #Science and other scientific journals, less has been written about the causes of the harassment. Here are a few factors to consider:

The important point is harassment decreases the effectiveness of the workforce and destroys lives. 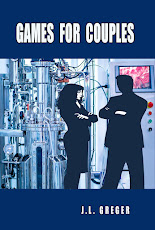 In GAMES FOR COUPLES, I tried to show the consequences of sexual harassment  on women engaged in a scientific endeavor - the development of cultured meat (the so-called meat grown in a test tube) - while creating an exciting, but realistic murder mystery. So, enjoy the plot but think about the consequences of Me Too moments.
Blurb for GAMES FOR COUPLES: Did lethal compounds in a cultured meat product kill a man in a clinical trial? Or did the toxic competition among biotechnology companies and spite of battling couples cause his death?
Posted by J. L. Greger at 6:11 AM